At Our First Pinewood Derby 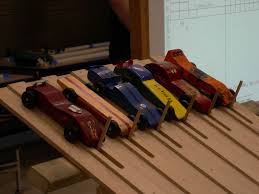 derby cars for those with mishaps.

And he is, perhaps.

I, on the way other hand,

to a spray painted wedge

and called it a day.

suggesting science, so it was

But the point wasn’t for me

to take physics for the third time.

Nor was it for James to lose

So I did my best, sort of, since

the bandsaw was stuck in storage

and sanding is so messy.

I mean, we did our best.

A kid wearing a bad haircut and a canteen

comes over and I don’t flinch,

having been to enough pack meetings.

But I’m still a little nervous that

fuzzy science will fail us miserably,

other dads, who pretend to be disinterested

as the race is about to begin.

But none of us are.

Once the action starts, almost

everyone’s on their feet. One car breaks,

and the delay is longer than rules allow,

but I could care less since it wasn’t ours.

and these guys really are earning

their t-shirt boasts. Another couple of

races, and all I can see now is asses

of moms and dads in glasses,

and I’m pretty sure science lost by a lot

in the one race I’d seen

between some legs, or maybe

science was sabotaged. By me.

of wood with holy water and wave

That, or the bandsaw and sandpaper.

Casey, Paul, and I were three… Read More

With about two months left before… Read More

Does anyone on a football team… Read More

Lisa--Who Else? The first time, you… Read More
Back to Top
Text Size