Discovery World on the Wrong Day 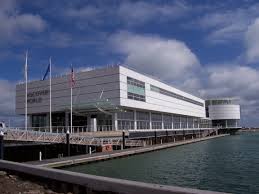 Have you ever gone to a museum on the wrong day? Most of us have made an attempt to visit a local museum on a Sunday, Monday, or occasional Tuesday. I remember being in Munich and deciding to see the world’s largest doll collection in a  museum (Spielzeugmuseum) with my friend Casey only to be mildly disappointed. But what if you decide you use your kids’ free passes to a museum on a day it’s open and operating just fine. What I’m talking about is the day you take your kids to Discovery World in Milwaukee when the local Boys and Girls Club shows up in en masse and basically takes over the joint, living up to suburban stereotypes and begging for a solution.

We arrived at the museum after a nice picnic in Veterans Park. We didn’t eat a lot because we were planning on a family bike ride up to Estabrook Park in order to enjoy a giant pretzel (and a beer for me). When we arrived, there was no line, so we got our tickets right away. It didn’t even seem all that busy in the hall. But then, as we walked towards the aquarium, we saw the contingent of kids begin exiting the lunch room. We knew right away that it was not a group we wanted to have to compete with on all the exhibits. This is an important consideration at a hands-on museum.

I can’t say for sure that we chose the wrong direction. It appeared as if half the kids were headed in each direction, so we quickly went one way. However, by the time we finished looking at the Great Lakes exhibit, we were surrounded. It was loud, chaotic, and annoying, but kids will be kids, so we carried on. Lisa and I had even discussed the relative problems of a society that was locked into needing the bus when the drivers go on strike. We agreed on that, but then the kids whose parents might be riding the bus to and from work show up, and we’re not feeling quite as liberal about families in need.

Anyhow, we went to the boat and water exhibit because most of the kids were heading for the aquarium, or so it seemed. Within minutes, we were again in a room overrun by kids. There were maybe five kids per adult, but I don’t think it mattered too much. We never once saw an adult tell them to quiet down or stop cutting in front of our kids. No guidance to help the kids understand all the stuff they were grabbing and looking at. Lisa suggested we vacate the water learning area because we couldn’t hear ourselves think, and the kids were not hearing her explanations about how we recycle raw sewerage. I said to her, “Could you imagine teaching 30 of these kids in a classroom?” She said it would be impossible. As we walked down the stairs, I got on my soapbox a bit, saying charter, voucher, choice, and whatnot, wasn’t going to fix the teaching of kids who have that much need for being loud, especially if those schools are run by folks like the adults trying to man the sinking ship at the museum. Maybe there’s a raw sewerage analogy, too.

Next, we tried the aquarium, thinking there couldn’t be anyone in there. Wrong again. The stingray petting area was completely out of control, the submarine was the definition of claustrophobia, and then the littleuns came in from the other side of the aquarium. Maybe they had taken longer at lunch, but they were certainly treating the aquarium like it was recess. At one point, as we were escaping, the guy in charge of the petting area yelled very loudly about there being too many kids. This large man, with a large voice, received no attention, and it seemed like he gave up. Maybe he ran out to get a supervisor. Maybe he just quit trying, like the adults in charge of the kids. It reminded me a bit of my day substitute teaching at Malcom X Academy back in 2000. The kids told me that their teacher was gone because she had told them if they made her cry one more time, she wasn’t coming back. When the sub office called me for a second day there, I declined. I was getting $100 a day, so I didn’t cry. I’m sure the guy at Discovery World is glad he doesn’t have to deal with the chaos for 180 days each year.

By this time, we’d seen a few fish and lifted ourselves up with pulleys, but that was mostly what we’d gotten out of the first half of the museum. We decided to head over to the main exhibits, thinking we could at least avoid the little kids who’d just gotten to the aquarium. That lasted all of ten minutes. I honestly could not believe I was seeing the same kids from the other side of the museum within minutes. Again, it was more look-touch-yell-run. At one point, James almost got taken out by a kid twice his size who was climbing up AND OVER the rock wall, still wearing the shoes that were supposed to be left in the shoe area. I began to imagine what I was supposed to do if some giant kid kicked my kid in the face while behaving in this way, but it was a narrow miss.  Lisa asked if any of the kids knew what an indoor voice was, which was possibly ironic, since we were inside the energy-efficiency house inside a museum at the time. “I don’t think so,” I said, as three boys climbed into the house through a window.

Luckily, we outlasted most of the Boys and Girls Club kids, and we saw an opportunity to revisit some of the exhibits we’d missed on the other side of the museum, so it wasn’t a total waste. Yes, we still had a fun family outing, and the our kids still learned a few things, but it’s really the ones who made that learning more difficult that concerned me. Not just for their own lack of awareness that they could have learned, and not just for the lack of leadership shown by their chaperones, but also because it took my kids twice as long to get anything out of what we were doing. It reminded me of being in classes back in the day at two of Milwaukee’s “finest” schools: Wilbur Wright Middle School and John Marshall High. Classes wasted because of discipline problems and assemblies where there was more performing in the audience than on stage.

And it comes back around to the total decline of MPS, because I don’t want my kids attending a school like the ones I went to. They can’t afford to take twice as long to learn. So parents move to the suburbs and set up schools away from the problems, and the problems get worse because the teachers can do little more than try to control the kids. And all those other parents who were at Discovery World with us (the ones who have moved out to get away from the city) received one more affirmation that they made the right choice.

I hate to write something this long and not have a solution. It’s not voucher schools, firing teachers, or shutting down Boys and Girls Clubs. It’s not banning certain groups from ever taking field trips. It’s not my family going home and saying we’ll try it another day. And it shouldn’t be that everyone just has the goal of getting enough money to move out to the suburbs. The real deal is this: the same kids who went to Marshall with me and got my school banned from field trips to the zoo are now the parents of the kids we met at Discovery World. Those parents never taught their kids to behave in public places because they never learned. Some of those parents are riding the buses to and from work, maybe frustrated with what life has dealt them, but they’re not seeing the writing on the wall: you don’t gain respect by acting like you own the place, but you can eventually own the place if you earn enough respect.

I’ve thought for a lot of years that boarding schools were the best way to go with Milwaukee’s youth. I don’t think there’s enough voucher money out there to get it done, so it’s probably a lost cause, and maybe that’s not really the answer, either. You go home for weekends and holidays, and those same parents are still there. And we all know it’s the parents. Maybe the solution is parental vouchers. Vouchers for PARENTS to get classes on how society works, why education is important, and that sort of thing. But also vouchers to get those parents into those public places with their own kids. A system in which families can earn more opportunities based on behavior while at those places, as in, “Here’s my free admission feedback form. Please fill it out and send it in so that my family can keep attending programs like this.” With so many people wanting to blame an entitlement system for lack of responsibility, this is a solution that allows those with less to earn more because of responsible behavior, and it’s not based on shaming them into anything. Liberals and Conservatives could argue about how or where to implement such a program, but ALL of us would benefit from such a system, including those kids who didn’t learn anything on a field trip to Discovery World.