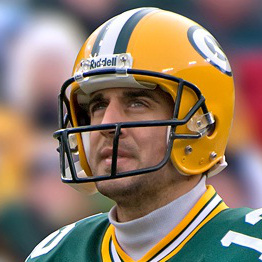 Does anyone on a football team exude as much confidence (or have a better chance of knowing what "exude" means) as the quarterback? Aaron Rodgers is the local man crush champ because I live in Wisconsin. If you live near Chicago or Minneapolis, I guess it's...also Aaron Rodgers. Divisional rivalry joke.

Anyhow, Aaron is cool and in control, just like all of us want to be when the boss comes to ask us about the quarterly report. "Just RELAX, boss man. I got this." Aaron is like the brother or cousin or sister's boyfriend you always wanted to have. He's seemingly happy playing for the smallest market in football. He's athletic. He's confident without being so cocky he annoys his own fans.

You can bet that if you hung out with Aaron Rodgers at the local pub, every lady within driving distance would also be there with you, so that makes Aaron a fine wingman for anyone in need. Unlike some of the guys on the Man Crush Fan Club site, Aaron Rodgers is a legitimate static sticker on your kids' wall kind of guy.

Rating = 5 Candles in the Wind

Is your childhood glory so far… Read More

Automatic For the People: A strong R.E.M. effort

The American Dream is Still Alive