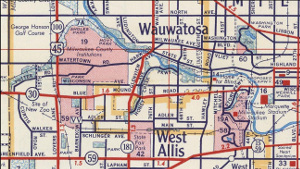 When I found the 1950s era map of our neighborhood, I was interested in not only what was added but what was deleted, and it seemed a fairly major road had disappeared: Barnekow Avenue. Sure, it was no Lover's Lane or Glenview Avenue, but Barnekow was the third street that went from Greenfield Avenue to Bluemound Road. I decided to research missing road a bit, but the best way of finding out more, if you're interested, is to ask one of your neighbors who has been living here since the early 50s.

What I fund was a couple PDFs from the Milwaukee County Zoo newsletter from the 1950s that mentioned the new zoo, which was being built on 160 acres at the corner of Bluemound and Barnekow. The other information I found was from a car dealership ad from 1951 that said that Chet Barnekow Motors at 9423 W. Greenfield was where you could buy a Hudson, "the most durable car your money can buy." I'm not sure if Chet built the road, but the Barnekow family had lived in the area for some time, as you can see in the 1930 map, which shows tracts of land between Schlinger and Bluemound being owned by F.N. Barnekow, E. Barnekow, and J. Barnekow. The only remnant of Barnekow Avenue I could find is one of the bridges in the Zoo Interchange. I wonder if it will still have that name when construction is is complete.

I also found the ads for a planned "restricted wooded community" at the corner of Barnekow and Blue Mound called Forest Dale. Yet another resource says that there was a young swamp white oak along Barnekow south of Bluemound back in 1900 that was a specimen that, if left to grow, might resemble the great oaks of Massachusetts. I wonder what happened to that tree.

Honestly, my own research will probably end with a quick internet search and looking at a few maps. I saw that Frank Barnekow built a building up on Teutonia in the 1920s, so that might be a relation, as well. However, I am not, and that's why I'll just post a few paragraphs in case anyone in the neighborhood is interested in a few of the missing items from the maps. It's kind of sad when you think about it, though, that a family that managed to get a road named after it lost the naming rights once the Zoo Interchange came through. That is, of course, unless they made millions of dollars on the deal or if the car salesman was dishonest and there was some sort of Karma involved.