Canes, Walkers, and Inability to Stand Linked to Falls 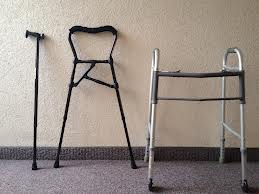 People who use walkers and canes are apparently four times more likely to fall down, according to a study by the most interestingly-named professor you’ll read about all year, Tine Roman de Mettelinge. She and her team followed 43 elderly people in order to wait and see when they would fall down, and apparently those who tried to use canes and walkers (improperly) fell at a much higher rate than those who did not use the devices for help.

Of course, common sense says that people who need help walking will fall more often because they need help walking, not just because they’re misusing their walking aids. An objective observer might wonder how often of the people relying on walkers would have fallen without the walkers in the first place. While cruel, that would have been the only valid version of this particular study, right? If you have 100 people who ALL need walkers or canes and then take those devices away from half the people. If those who lose their devices miraculously stand and walk, then walkers and canes should be trashed. If 100% of the people who need canes or walkers fall down when they no longer have those devices to help, more than likely they need to use the help.

Furthermore, I would take 100 people who DO NOT need walkers or canes and give the devices to half the people to use, anyhow. Does the use of these devices now cause healthy people to fall down more often? If so, then I’d say people who don’t need them should not use them, and people who do need them probably should use them, which, I believe, was already the conventional wisdom before the study in Belgium, which didn’t even try to prove anything beyond the conventional wisdom per se.

It does make you wonder a bit as to who comes up with these studies, who approves them, why they’re published, whether or not the people Liking the article on Facebook actually read it, and why I’m bothering to respond to it right now. Then again, I guess the study itself, publishing the findings and an article about that publishing, and all the Facebook and news source ads seen by those who thought they were learning something all generated money for someone other than myself. Until you showed up right here.