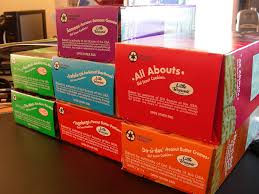 I’d love to address the etiquette (or lack thereof) related to female sales “parties” or people no longer responding to RSVPs. Those are major issues in dealing with others, but the topic for today is similar in many ways: proper etiquette in selling Girl Scout cookies.

Our daughter made her way around the neighborhood for the second time in her GS career this past month, as well as the obligatory family and friend phone calls. We even had her asking a few people at church. Lisa and I did not and have never taken the order forms to work, and we also did not send the blanket email or Facebook posts. The question is whether or not how we handled it was right or wrong, and if others (or us) need to change. What follows is my personal, unofficial set of rules when it comes to selling cookies.

Let’s start with the obviously wrong. A Girl Scout leader I know was selling Girl Scout cookies early this year, which is apparently something many leaders will punish. I guess the idea is that girls are supposed to focus on the short selling season and show dedication. When their parents sell at Christmas instead, it’s seen as not playing fair. I guess I can agree with this, but it’s not going to stop certain leaders and avid sellers from taking the opportunity to accost relatives as early as possible.  Since this one is written down and talked about a lot, it gets a 5/5 cookie rating for naughtiness.

The next big question is whether to sell at work. Just the wording of it implies it’s wrong because the girls aren’t the ones selling at work, are they?  I know a number of websites offer advice about this, some of them discussing how to do it more effectively. Maybe official Girl Scout material does not discourage it, but I certainly would. Why? The whole point is for the kid to learn something. Do you want to teach your kids to rely on you for everything? Yes, they are young, but it’s selling cookies for two weeks, not sewing clothes together in a windowless room. If she doesn’t want to hit the pavement, allow her to not sell as many as her friends. Not that big of a deal. The biggest issue I have with selling at work is because some kids still do go door-to-door. Our daughter, one of the girls who showed drive and initiative, was told by about 10% of the people that they’ve already bought at work. Keep in mind, she went out on Day 1. Do some of our neighbors work at businesses that hire little girls? My work always had a sheet sitting in the office, and one of the sellers was my direct boss. Is that fair? However, I get it that some people might WANT to buy at work because they really like your kid or really don’t have anyone else come around. Therefore, I’d say the proper etiquette is to offer it in that honest way, letting people know that you have some cookies to offer them if they want to support your daughter’s troop, but that you also (hopefully) have her sell to neighbors and would rather they buy from their own neighborhood, since that’s teaching the other kids more about hard work. A perfect example of this comes from our own neighborhood: a couple who work in two schools told our daughter they bought at work. Both of the people work in high schools. They, most likely, did not buy from their students; they bought from co-workers whose kids were too busy being brainwashed on a tablet to go out and sell.

This is the main reason I wrote this article. Our daughter sold in both of these situations, and it was uncomfortable both times. In fact, it was so uncomfortable that we set up some rules for next year. Here’s how it played out: my wife took her around the neighborhood as soon as possible, both on first night and second day of the sale. On the second day, they ran into two other scouts, plus they learned a girl up the block had now joined, as well. Because our kids attend Milwaukee German Immersion and our neighborhood encompasses both Milwaukee and Wauwatosa, it’s complicated. We don’t know the other kids, and they don’t know us. On one block, they were selling when they saw another dad head out with his daughter, eventually meeting and discussing who had sold to which house. Awkward, but still part of the lesson. Our daughter was determined enough to get out there first, so she got more of the sales on that block. The other turf you might encroach upon would be that of an organization that runs its own Girl Scout troop. We did this, too, as my wife decided to let our daughter sell at church to people we knew, even though we knew there’s a separate troop at church. It seemed fine until the leader came up and asked what they were doing, and then told them she was going to have cookie booths set up after the initial sale. She was basically telling us to stay off her turf, and it was embarrassing, even if it was only people we knew that were asked. From the experiences, we made a couple of rules, one being NOT to sell in the open at an organization that hosts its own troop. The other rule is to communicate with other girls we see during a sale or others we know of on the block. If you’re kids are in the same troop together, maybe sell together on the same block. If not, stop by the competition’s house early in the sale to serve notice that you’re about to take all their local sales. Still awkward, regardless.

This one’s not a big deal to us. If you send an email to all your contacts and hope for the best, you’re probably not going to get a lot of response, anyhow. I believe friends and relatives buying online have to pay shipping. I’d just tell them to order from the girls in their neighborhood, if possible, unless they really want cookies sent to them.Most people ignore your Facebook posts, anyhow, so you may or may not get much this way. The main point is that your daughter is not supposed to have her own FB account until she's like 13 or something, or is it 18? Do you really want her friending some guy names Brett to ask if he wants to buy her cookies? Do you want him to say yes? Totally your call here.

It’s not a huge deal to exploit your friendships to achieve cookies sales. However, it should be your daughter doing the asking on the phone, even if you’ve already confirmed it in a text message. A phone is a device one uses to speak to another person verbally. Kids should learn how this works and should be comfortable enough to do so around your friends because if your friends are too creepy for your kids to talk to, maybe you need to reconsider the relationships.

This method can be naughty if you get stuck eating way too many cookies. I see the temptation to help get to the next level by buying a few boxes. We made it a point to sell more of those boxes this year, since we ate too many last year. It’s nice to have some boxes for direct sales. Just get the popular kinds and go to the houses that had no answer earlier in the sale. If you just buy 50 boxes to make up for laziness or because your princess wants the stupid stuffed animal, you’re doing her more harm than good, especially if she eats all of the cookies.

Most schools and teachers have rules about this. Sports coaches in high school tend to disregard these rules. If your daughter can get away with it, why not? However, I know from being a teacher that wealthy kids trying to get money out of me to support any cause was simply annoying. And kids eating in class was annoying.

This get a 1 just because it’s still a bit of a guilt trip. You also need to remember to reciprocate, which can really stink when your cousin’s kids are selling way overpriced popcorn or coffee for Boy Scouts, but that’s a whole other article to write.

Selling to Neighbors - NOTHING naughty

Do it. If you have older neighbors, many of them will invite you inside. Let them talk to you for a while. Smile, and tell your daughter to smile, even when they say no. Get to know the people who live two, three, or ten houses over. Sell at the local grocery store at a booth (with permission, of course). This is what the sale is all about: girls learning about business relationships. Yes, family and friends are important, but you can only achieve those lofty goals by

1. having an overbearing parent do it for you or

2. working really hard to do it yourself.

I know these rules of etiquette won’t work for everyone, and these are only MY rules, anyhow. Besides, I know you might feel even MORE guilty if you don’t break a few minor rules here or there to help out, but it’s important to keep the spirit of the sale in mind. If you’re breaking all kinds of rules and kidding yourself into thinking it’s just about funding Girl Scouts, then simply write a check for $1000 to the troop. That would take less time and effort, and the net profit would be the same as selling nearly 2000 boxes of cookies.