My grandpa, great-grandpa, and great-great-great grandpa fought for this country in three major wars. My dad was in the Air Force. Even though I never quite started the NROTC program, I benefit from their service. While Veterans Day 2014 sees me unemployed, I guess I at least have the time to document a few of Grandpa Ray Ost's World War II items for posterity and other researchers. I will add other items as I remember them or find them. I will also add a bit of a description here.

While this is by no means a large collection, it represents one man's choice of what he brought home and decided to keep after the war. Since my grandpa did not talk to me about the items, I will make some guesses as to the stories behind them, sometimes based on research and other times best guesses. 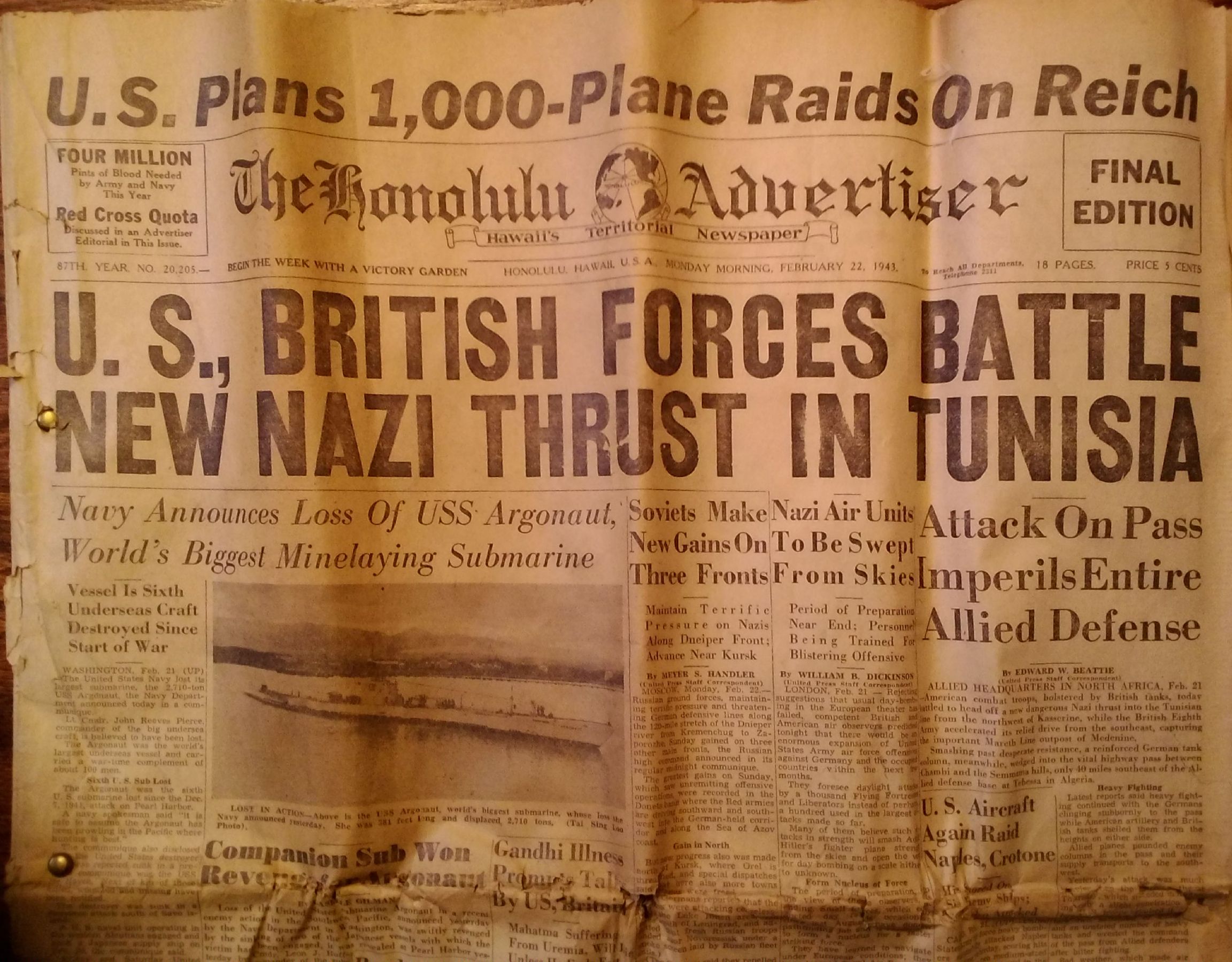 The first items are two Honolulu Advertiser newspapers Grandpa brought back with him. In fact, since they're dated 1943, I have to assume he took the papers with him after having been in Hawaii for a time. I am not sure why he chose these two papers, though I did scan some images of interest to me. I did not see any specific articles, ads, cartoons, or classifieds that seemed to make sense as to why he kept them. Maybe he wasn't in Hawaii longer than a few days or weeks, so he grabbed a couple of souvenir newspapers. He did go back later in life with Grandma Ost, so maybe he had fond memories of the islands. Make sure you read the ad written in Asian dialect that would not be politically-correct today. 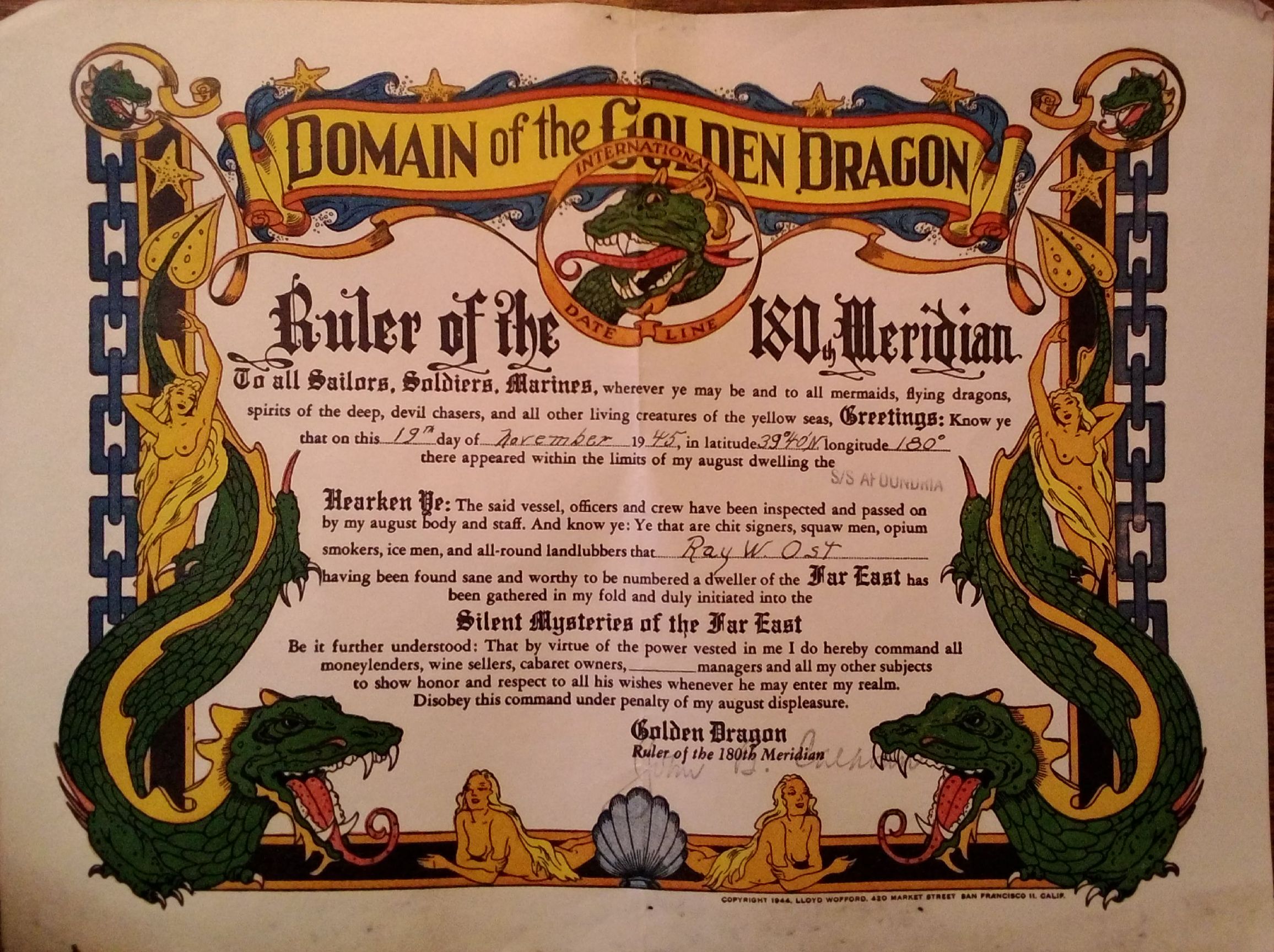 Domain of the Golden Dragon and Domain of Neptunus Rex

These seem to be similar in nature: certificates for being on a ship in the Pacific. One mentions the international date line while the other does not. No evidence seems to exist that drinking played a role in the earning of the certificates. However, had I been in the middle of a war in the middle of the ocean stuck on a boat with a bunch of guys, I probably would have liked it if I got to drink once in a while, and I probably would have enjoyed getting certificates with my name on it before, during, or after the drinking. Even if there was no booze at all involved, I'm sure the idea would be to keep morale up with a certificate of achievement.

Pocket Guide for the Returnee

If you're gone from home for several years, a lot will have changed when you return. That's the basic idea behind the pocket guide for returnees. I don't know if our most recent conflicts have warranted such a guide or how long the current tours of duty tend to last, but we must have thought it was an important gesture to hand out guides back in 1945. Of course, maybe the first soldiers home didn't have the handy four-page guide, which might have led to some awkward situations.

Maps of All Fronts

I wonder if the map was more of a tourist item than a useful tool. I mean, think about it: would the government really issue world maps with all the fronts to their troops? Besides, I'm not sure there was enough detail to help anyone navigate the South Pacific. It's an interesting item, nonetheless, since my grandpa decided to keep it with his other belongings throughout the conflict, which means he must have been convinced it would come in useful if he was abandoned on an island or suddenly found himself in Europe. I think the title is great, as it implies that an Army Private could use the map to help strategize along with the generals, a bit like today's amateur strategists draft sports teams in order to "coach" them to victory.

I'm not sure how many guys from WWII came back with Japanese books, but Grandpa Ost had two of them. I remember carrying a book and a beer stein through most of Europe and wishing I hadn't myself. One of Grandpa's  books makes sense as it is called the English-Japanese Dictionary of Hydrographic Terms. I guess a soldier, confronted with the enemy and needing to communicate, could point to the words he was thinking. Many of the terms in the book seemed military in nature, like "compass" or "compound," but I was less certain of "comprador's wages" or the fact that the word "peace" was not translated. The other book was entirely in Japanese. It's a math book because it has equations, but that's all I can tell. I kind of assume my grandpa got it from a prisoner or dead Japanese soldier, and I might assume that person to have been an engineer, since I can't imagine too many foot soldiers needing books about math.

Since the Aspirin container was from 1939 and with all the WWII stuff, I kind of assumed it went with my grandpa to the war, or it was something he purchased while there. As a medic, I'm sure he had access to all kinds of meds, but he probably needed an Aspirin himself once in a while. Notice that it's not Bayer Aspirin. Bayer is a German company. A side note is that Grandpa Ost's records from the Army show that he had a college education, which he did not. However, my mom and I figure he maybe received a higher rank, preferable duty, or more pay for recognition of a phantom college education, whether it was his idea or his commanding officer's.

The coffee token is from Sambo's in Richland, Washington, which is over 100 miles from the coast, so it's a bit of a mystery to me why it was with Grandpa's war items. His returnee document made it seem as if he came back via San Francisco. I guess it's possible he took a bus or something, but the current Amtrak from Seattle does not pass through Richland. Maybe he had a buddy from that town and it was a reminder of him.

Foreign Coins and a Clear Heart

The coins are not a surprise as I assume a lot of soldiers brought back minimal currency from oversees. I'm sure some of the coins are more interesting or rare than others, but I have not done the research. I'm sure several of the coins have stories behind how my grandpa came across the them.

However, the sawed coins are the interesting ones to me, just as is the clear plastic (lucite?) heart. When I researched shaped coins from the war, I read that many servicemen made bracelets for their special ladies with shaped coins and other materials. Grandpa Ost seemed to be cutting a very intricate shape compared to most of the others I saw, and the four coins he completed looked a little like the shape of Texas to me, though I'm not really positive what it's supposed to be. Maybe it's just the shape surrounding the animals and nothing more. Anyhow, I assume he was thinking of creating some kind of keepsake that he never quite completed.

Metaphorically, the clear heart could represent the returning soldiers, ready to love their wives or girlfriends back at home. We hope most of them return with a clear consicence about what had to be done or even what wasn't done as well as could have been. Some of those soldiers told their stories, but many of them hid them away in a drawer in the basement like my grandpa. While I may never know the whole story behind any of the items, they do help me in my endeavor to write a novel that involves elements of WWII. Some details can be researched, some can be guessed, but I hope I can capture at least a few that truly represent my grandpa.

Joining a Chamber of Commerce Near Milwaukee

I have a limited advertising budget.… Read More

Is your childhood glory so far… Read More

Got an Acer Chromebook? Then Get One of These Craniums